EUR/USD rallied today on the back of
better-than-expected inflation data released in the eurozone and kept its gains after mixed US nonfarm payrolls. The currency pair dipped for a short while following the release of positive US manufacturing reports but bounced back very quickly afterwards.
Nonfarm payrolls climbed by 304k in January, much more than analysts had predicted — 165k. On the negative side, the previous month’s reading got a downward revision from 312k to 222k. The rest of the report was not that good as well. Unemployment rate edged up unexpectedly from 3.9% to 4.0%. Average hourly earnings rose by just 0.1% versus the forecast increase of 0.3% and the gain by 0.4% registered in December. (Event A on the chart.)
Markit manufacturing PMI was finalized at 54.9 in January, up from 53.8 in December, unchanged from the preliminary estimate and matching forecasts. (Event B on the chart.)
ISM manufacturing PMI climbed to 56.6% in January from 54.3% in December, whereas analysts had expected it to stay about unchanged. (Event C on the chart.)
Michigan Sentiment index dropped to 91.2 in January from 98.3 in December according to the final estimate. The average forecast had promised about the same reading as 90.7 showed in the preliminary estimate. The January reading was at the new low since Trump was elected. (Event C on the chart.)
Construction spending rose 0.8% in November from October, exceeding the median forecast of 0.2% and the increase of 0.1% registered in October. (Event C on the chart.)
Wholesale inventories increased by 0.3% in November, compared to the increase of 0.5% predicted by analysts and the expansion by 0.8% logged in October. (Event C on the chart.) 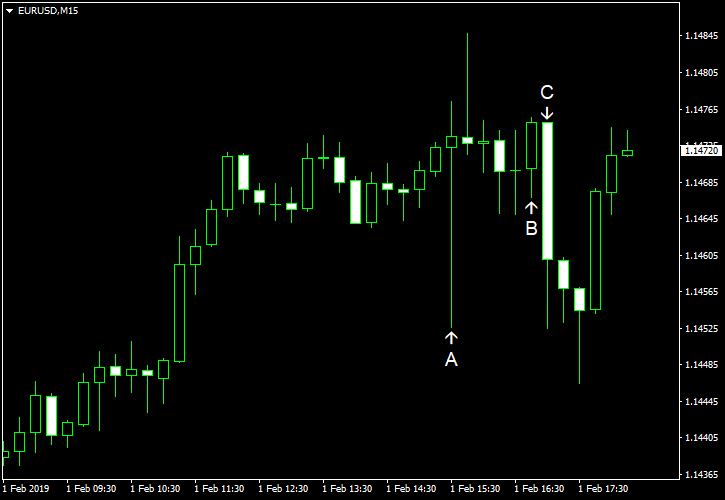