EUR/USD Bounces After Mixed US Data

EUR/USD was heading lower at the beginning of the Friday’s trading session but has bounced later and is now trading near the opening level. Data in the United States was mixed, but it looks like traders paid more attention to bad parts as the currency were moving higher after almost each release.
Empire State Manufacturing Index climbed from 3.9 in January to 8.8 in February, exceeding the median forecast of 7.1. (Event A on the chart.)
Import and export prices fell in January. Import prices decreased 0.5%. That is compared to the forecast drop of 0.1% and the previous month’s decline of 1.0%. Export prices dropped 0.6%, the same in December. (Event A on the chart.)
Industrial production and capacity utilization also dropped in January. Production decreased 0.6%, while experts had predicted the same 0.1% decrease as in December. Capacity utilization decreased from 78.8% to 78.2%, while the average forecast had promised it to stay unchanged. (Event B on the chart.)
Michigan Sentiment Index climbed to 95.5 in February from 91.2 in January according to the preliminary estimate. The actual figure exceeded the analysts’ median prediction of 93.3. (Event C on the chart.)
Net foreign purchases were at -$48.3 billion in December after logging a reading of $32.0 billion in November. Forecasters had totally missed the mark with their predictions of $34.5 billion. (Event D on the chart.) 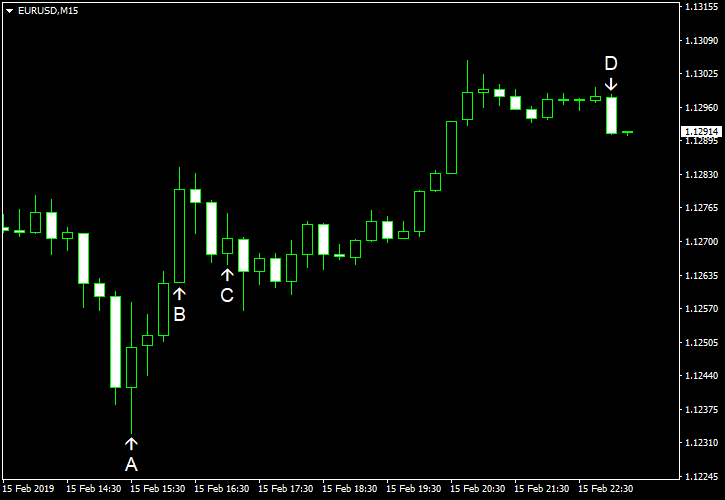