EUR/USD demonstrated significant volatility today after a big number of economic reports were released both in the United States and the eurozone. The dollar and the euro were mixed as traders were trying to digest the data. Currently, the EUR/USD pair trades slightly below the opening level after attempting to rally earlier.
US durable goods orders rose 1.2% in December, missing the analysts’ average forecast of a 1.6% increase. The orders were up 0.7% in November. (Event A on the chart.)
Philadelphia Fed manufacturing index dropped from 17.0 in January to -4.1 in February. The consensus forecast promised a far smaller drop to 14.1. (Event A on the chart.)
Initial jobless claims dropped from 239k to 216k last week, below the forecast level of 228k. (Event A on the chart.)
Markit released flash readings for US Purchasing Managers’ Indices in February. Markit manufacturing PMI dropped to 53.7 this month from 54.9 in January, whereas specialists had predicted it to stay unchanged. At the same time, Markit services PMI jumped to 56.2 from 54.2, while the median forecasts had promised just a small increase to 54.4. (Event B on the chart.)
Leading indicators fell 0.1% in January after showing no change in December, while economists had expected an increase by 0.1%. (Event C on the chart.)
Existing home sales fell to the seasonally adjusted annual rate of 4.94 million in January from 5.00 million in December. Forecasts had promised the indicator to stay about unchanged. (Event C on the chart.)
Crude oil inventories increased by 3.7 million barrels last week after rising by 3.6 million barrels the week before. The average forecast had promised a smaller increase by 2.9 million barrels. The stockpiles remained above the five-year average for this time of year. Total motor gasoline inventories dropped by 1.5 million barrels but also stayed above the five-year average. (Event D on the chart.)
Yesterday, FOMC released minutes of its January monetary policy meeting, showing that some policy makers were still believing that at least one interest rate may still be appropriate this year (not shown on the chart):

Several other participants indicated that, if the economy evolved as they expected, they would view it as appropriate to raise the target range for the federal funds rate later this year. 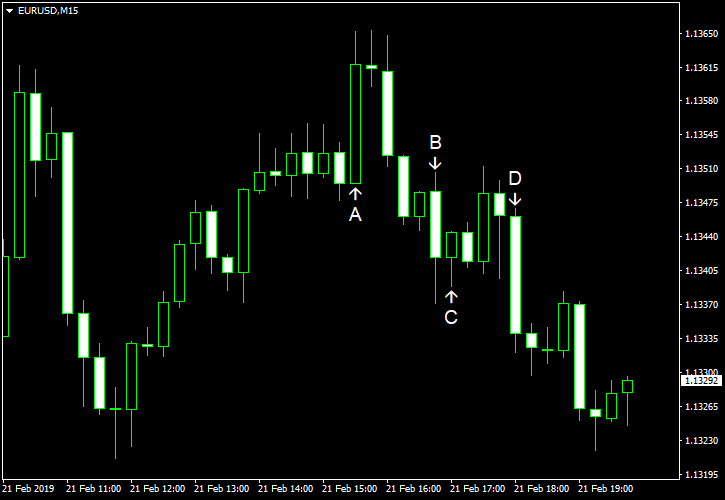