EUR/USD rallied intraday but has trimmed its gains later. US macroeconomic data beat expectations, adding to the downside momentum of the currency pair.
US trade balance deficit shrank to $49.4 billion in February, down from $51.1 billion in January. That is instead of rising to $53.5 billion as analysts had predicted. (Event A on the chart.)
Wholesales inventories rose 0.2% in February. That is compared to a 0.4% increase predicted by analysts and the 1.2% rise registered in January. (Event B on the chart.)
Crude oil inventories dropped by 1.4 million barrels last week, falling below the five-year average for this time of year, instead of rising by 1.6 million barrels as experts had predicted. The stockpiles swelled by 7.0 million barrels the week before. Total motor gasoline inventories fell by 1.2 million barrels and were also below the five-year average. (Event C on the chart.)
Yesterday, a report on industrial production and capacity utilization was released. It showed that industrial production fell 0.1% in March after rising 0.1% in February, whereas specialists had predicted a 0.2% increase. Capacity utilization slipped from 79.0% to 78.2% versus the forecast increase to 79.2%. (Not shown on the chart.) 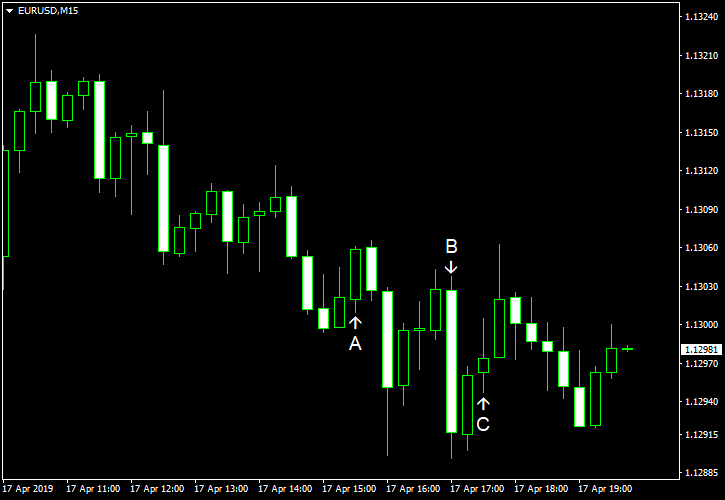