EUR/USD Volatile After NFP, Decides to Go Higher After All

EUR/USD was moving gradually lower ahead of US nonfarm payrolls. The currency pair experienced significant volatility immediately after the release of the employment data as it was mixed. While the employment and unemployment figures were much better than was expected, wage inflation missed forecasts. Ultimately, markets preferred to focus on the bad part of the report, and the EUR/USD pair went up. The unexpected drop of the ISM services PMI gave even more reasons for the pair to rise.
Nonfarm payrolls climbed by 263k in April, exceeding market expectations of 181k increase by a wide margin. The March increase got a negative revision, though, from 196k to 189k. Unemployment rate declined from 3.8% to 3.6% unexpectedly. Average hourly earnings rose 0.2% in April from the previous month, the same as in March (revised up from 0.1%), but missing the analysts’ consensus of 0.3%. (Event A on the chart.)
Markit services PMI fell to 53.0 in April from 55.3 in March according to the final estimate. It was close to market expectations and the preliminary figure of 52.9. (Event B on the chart.)
ISM services PMI fell to 55.5% in April from 56.1% in March, whereas analysts had expected it to rise to 57.2%. (Event C on the chart.) 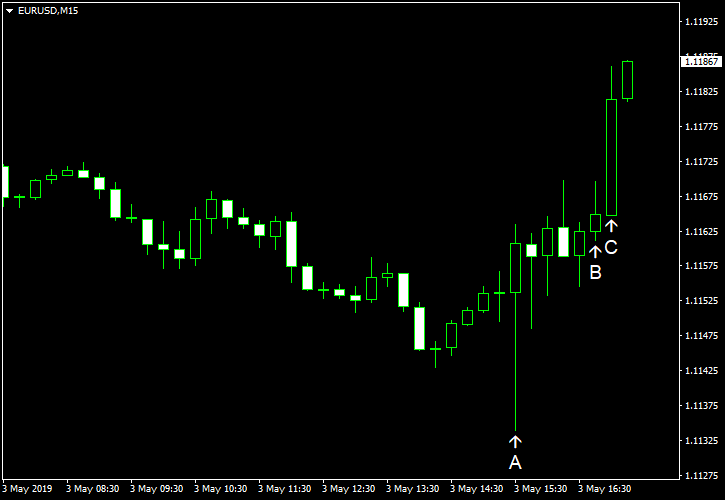