Trading was somewhat directionless during the Thursday’s trading session. Moves of EUR/USD reflected that as the pair was moving higher intraday but then reversed its direction and went below the opening level. The EUR/USD pair continued to move lower after the release of FOMC minutes, which suggested that the FOMC does not plan either hike or cut interest rates this year.
US crude oil inventories rose by 4.7 million barrels last week instead of falling by 1.2 million barrels as experts had predicted. The stockpiles were above the five-year average for this time of year. Last week, the reserves jumped by 5.4 million barrels. Total motor gasoline inventories rose by 3.7 million barrels and were above the five-year average. (Event A on the chart.)
FOMC released minutes of its latest monetary policy meeting (event B on the chart), revealing that US policy makers think that the recent soft readings of inflation were due to transitory factors:

At least part of the recent softness in inflation could be attributed to idiosyncratic factors that seemed likely to have only transitory effects on inflation, including unusually sharp declines in the prices of apparel and of portfolio management services.

And as a result:

Participants generally agreed that a patient approach to determining future adjustments to the target range for the federal funds rate remained appropriate.

Yesterday, a report on existing home sales was released, showing a drop to the seasonally adjusted annual rate of 5.19 million in April from 5.21 million in March. That instead of an increase to 5.35 million predicted by specialists. (Not shown on the chart.) 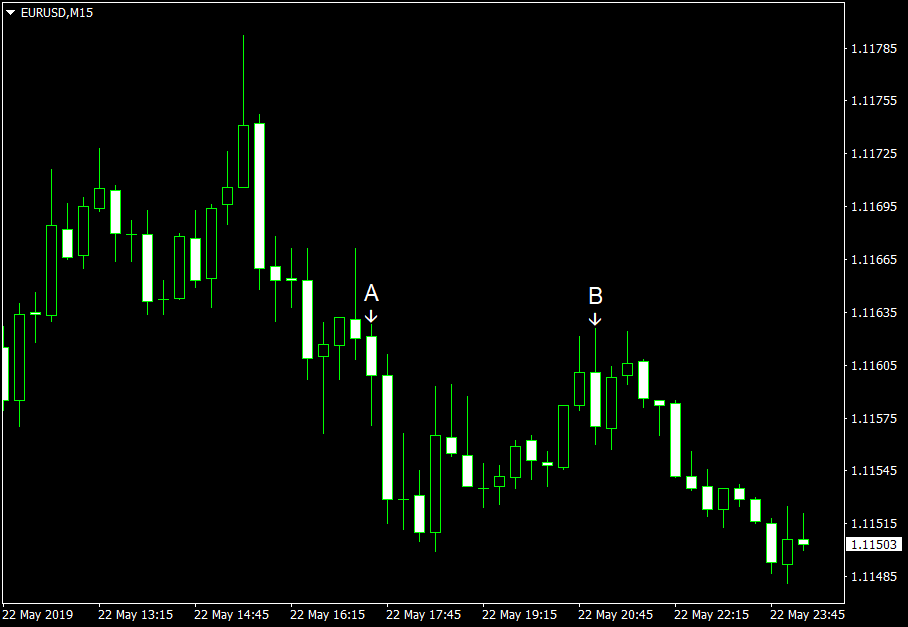