EUR/USD declined during today’s trading session but has bounced by now. Markets have largely priced in the trade war between the United States and China, and the market sentiment stabilized. US macroeconomic indicators were within expectations for the most part, with the notable exception of pending home sales.
US GDP rose 3.1% in Q1 2019 according to the preliminary (second) estimate, matching expectations. That is compared to the advance reading of a 3.2% increase and the 2.2% growth registered in Q4 2018. (Event A on the chart.)
Initial jobless claims were at the seasonally adjusted level of 215k last week, matching forecasts, up from 212k the week before. (Event A on the chart.)
Pending home sales dropped 1.5% in April instead of rising 0.9% as analysts had predicted. The indicator was up 3.9% in March. (Event B on the chart.)
Crude oil inventories fell by 0.3 million barrels last week, somewhat less that experts had forecast — 0.9 million barrels. Nevertheless, the stockpiles remained above the five-year average for this time of year. The reserves expanded by 4.7 million barrels the week before. Total motor gasoline inventories rose by 2.2 million barrels and were also above the five-year average. (Event C on the chart.)
Yesterday, a report on Richmond Fed manufacturing index was released, showing an increase from 3 in April to 5 in May. The median forecasts had promised a slightly higher figure of 6. (Not shown on the chart.) 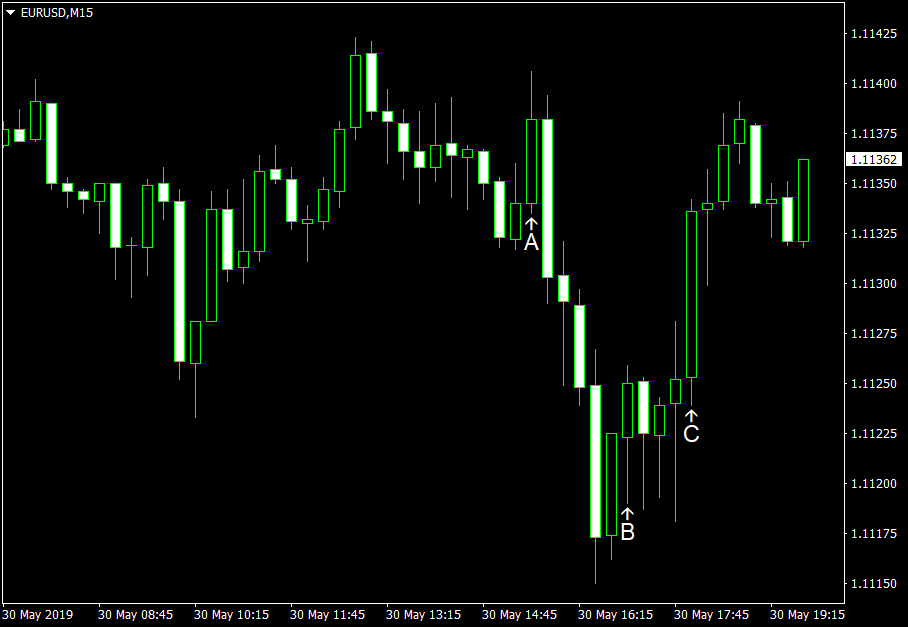 If you have any comments on the recent EUR/USD action, ple0ase reply using the form below.