EUR/USD rallied sharply today. There were two major reasons for that, though both of them were tied to the outlook for monetary policy of the Federal Reserve. Firstly, comments from Fed Chair Jerome Powell did nothing to contradict the outlook for two interest rate cuts this year. (Event A on the chart.) Secondly, minutes for the latest monetary policy meeting of the Federal Open Market Committee also supported the outlook for easing. As a result, the CME FedWatch page showed that bets on a 50 basis point cut this month increased, as well as bets on another cut in September.
Wholesale inventories increased by 0.4% in May, matching expectations, after rising 0.8% in April. (Event B on the chart.)
US crude oil inventories dropped by 9.5 million barrels last week, much more than analysts were expecting — by just 1.9 million barrels. Nevertheless, the stockpiles were above the five-year average for this time of year. The reserves declined by 1.1 million barrels the week before. Total motor gasoline inventories decreased by 1.5 million barrels and were at the five-year average. (Event C on the chart.)
FOMC released minutes of its June monetary policy meeting. (Event D on the chart.) The notes supported the outlook for policy easing from the Fed, saying:

With regard to the outlook for monetary policy beyond this meeting, nearly all participants had revised down their assessment of the appropriate path for the federal funds rate over the projection period in their SEP submissions, and some had marked down their estimates of the longer-run normal level of the funds rate as well. Many participants indicated that the case for somewhat more accommodative policy had strengthened.

On Monday, a report on consumer credit was released, showing an increase of $17.1 billion in May versus the consensus forecast of $15.2 billion. Credit rose by $17.5 billion in April. (Not shown on the chart.) 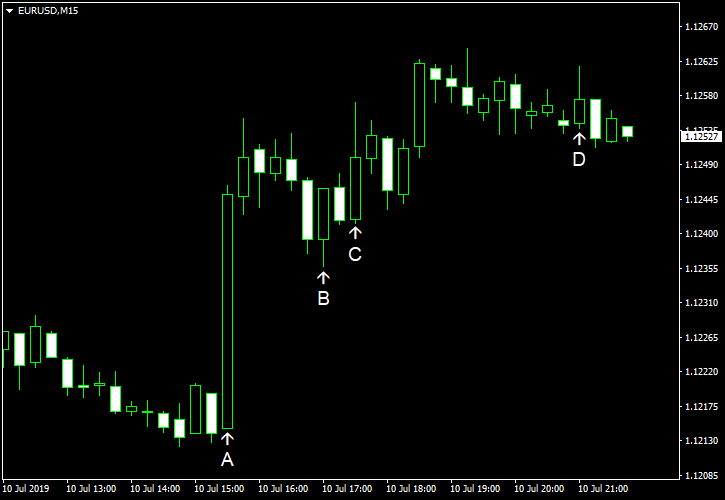