EUR/USD dropped after a range of weak PMI prints for the eurozone was released today. Currently, the pair attempts to recover but still trades below the opening level. US PMIs were mixed and housing data missed expectations, allowing the euro to regain some ground versus the dollar. The European Central Bank will make a monetary policy announcement tomorrow. While markets do not count on any changes to the current monetary policy, today’s weak eurozone data solidified expectations of a dovish language in the central bank’s statement.
Markit released flash manufacturing and services PMIs today. Markit manufacturing PMI dropped to the neutral level of no change of 50.0 in July from 50.6 in June, whereas analysts had predicted an increase to 50.9. Markit services PMI, on the other hand, rose to 52.2 in July from 51.5 in June, while markets were expecting it to stay barely changed. (Event A on the chart.)
New home sales were at the seasonally adjusted annual rate of 646k in June, up from the negatively revised May rate of 604k (626k before the revision). Nevertheless, the actual value was below the median forecast of 659k. (Event B on the chart.)
US crude oil inventories dropped by 10.8 million barrels last week, more than two times the forecast drop of 4.2 million barrels, and were above the five-year average for this time of year. The week before, the stockpiles shrank by 3.1 million barrels. Total motor gasoline inventories decreased by 0.2 million barrels but were also above the five-year average. (Event C on the chart.) 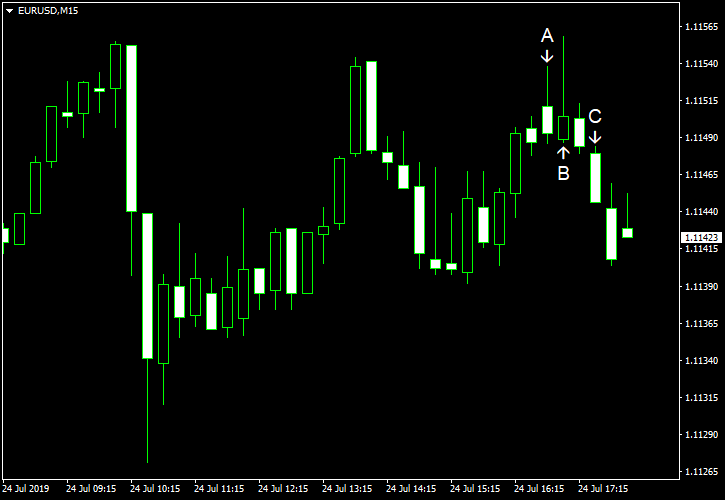