EUR/USD declined on Wednesday. Market analysts speculated that the decline was a result of anticipation of monetary stimulus from the European Central Bank, which it is expected to announce on Thursday. US macroeconomic data released over the trading session was decent enough to give the dollar additional boost against the euro.
PPI rose by 0.1% in August. That is compared with a consensus forecast of no change and an increase of 0.2% registered in the previous month. (Event A on the chart.)
Wholesales inventories rose by 0.2% in July, the same as in June and in line with forecasts. (Event B on the chart.)
Crude oil inventories dropped by 6.9 million barrels last week and were below the five-year average for this time of year. The actual drop was bigger than the forecast decrease of 2.7 million barrels and the previous week’s decline of 4.8 million barrels. Total motor gasoline inventories decreased by 0.7 million barrels but were above the five-year average. (Event C on the chart.)
On Monday, a report on consumer credit was released, showing an increase of $23.3 billion in July from June, which exceeded markets expectations of $16.2 billion. June increase got a negative revision from $14.6 billion to $13.8 billion. (Not shown on the chart.) 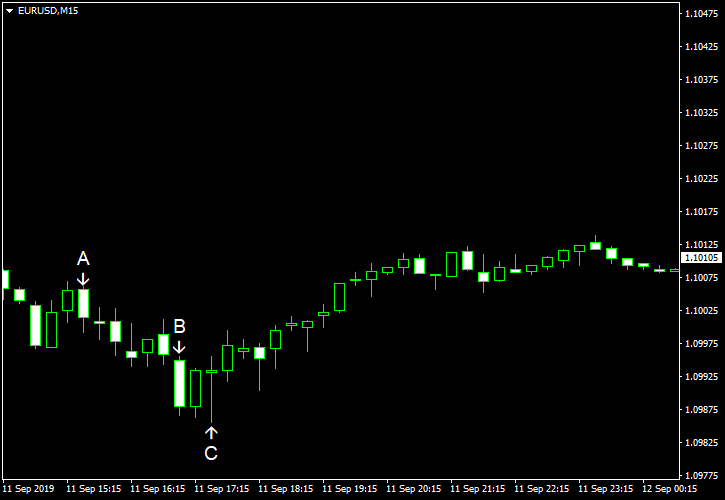