EUR/USD gained today after the release of US macroeconomic data that showed that growth of consumer spending slowed sharply and core PCE inflation also slowed unexpectedly. Not all reports were bad. The consumer sentiment improved much more than was anticipated. But that did not prevent the currency pair from continuing to rally.
Personal income and spending rose in August. Income rose 0.4%, matching expectations, up from 0.1% in July. Spending increased by just 0.1%, slowing from the July 0.5% rate of growth and missing the median forecast of a 0.3% increase. Core PCE inflation slowed to 0.1%, whereas analysts had predicted it to stay unchanged at 0.2%. (Event A on the chart.)
Durable goods orders increased by 0.2% in August instead of falling by 1.1% as analysts had predicted. The indicator increased by 2.0% in the preceding month. (Event A on the chart.)
Michigan Sentiment Index climbed to 93.2 in September from 89.8 in August according to the final estimate. Market participants were expecting the same 92.0 reading as in the preliminary estimate. (Event B on the chart.) 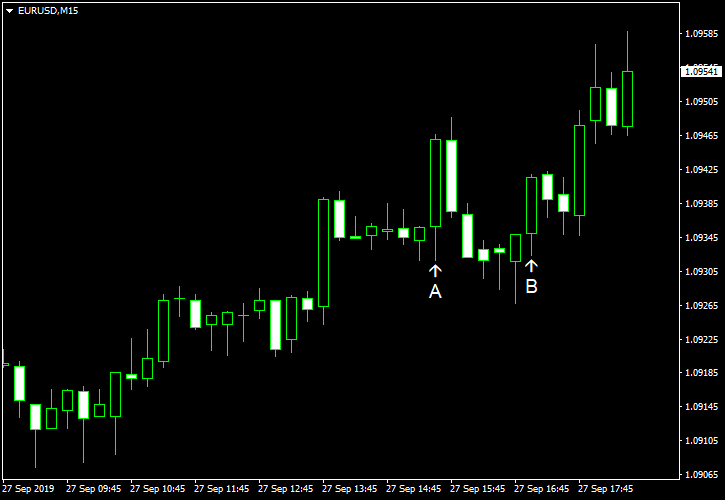