EUR/USD continued to rise today as the majority of macroeconomic reports released in the United States over the trading session were disappointing, missing expectations.
Philadelphia Fed manufacturing index dropped from 12.0 to 5.6 in October, below the forecast level of 7.3. (Event A on the chart.)
Housing starts and building permits decreased in September. Housing starts were at a seasonally adjusted annual rate of 1.26 million in September, down from 1.39 million in August. Building permits were at a seasonally adjusted annual rate of 1.39 million, down from 1.43 million in the previous month. The median forecast was at 1.32 million for housing starts and 1.34 million for building permits. (Event A on the chart.)
Initial jobless claims were at the seasonally adjusted level of 214k last week, up from the previous week’s unrevised value of 210k. It was slightly above the analysts’ median forecast of 212k. (Event A on the chart.)
Both industrial production and capacity utilization decreased in September. Industrial production fell 0.4%, whereas experts had predicted a smaller decline of 0.1%. The increase in the previous month got a positive revision from 0.6% to 0.8%. Capacity utilization fell from 77.9% to 77.5%, below the forecast value of 77.7%. (Event B on the chart.)
US crude oil inventories swelled by 9.3 million barrels last week, far more than analysts had predicted — 2.7 million barrels, and were above the five-year average for this time of year. The week before, the stockpiles increased by 2.9 million barrels. Total motor gasoline inventories decreased by 2.6 million barrels but remained above the five-year average. (Event C on the chart.) 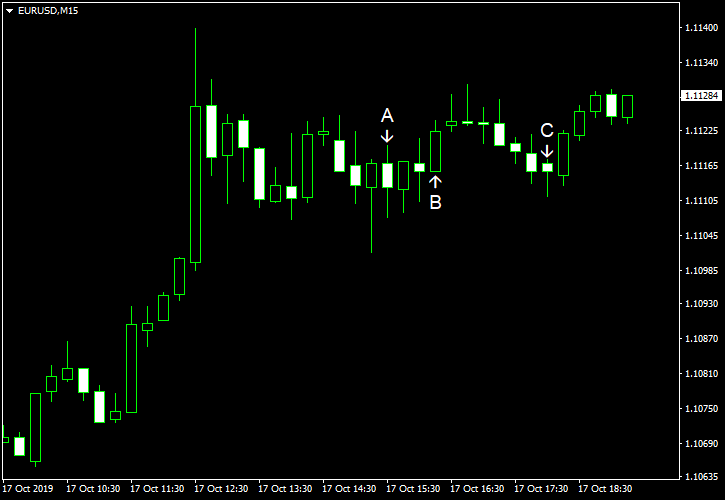