EUR/USD fell intraday but has recovered by now, trading near the opening level. The sense of optimism on markets about the US-China trade negotiations was helpful to the US dollar. But the positive influence was negated by the outlook for an interest rate cut from the Federal Open Market Committee at this week’s meeting. As for today’s macro releases in the United States, they were disappointing, with the consumer confidence demonstrating a surprise decline.
S&P/Case-Shiller home price index showed an increase of 2.0% in August, year-on-year, the same as in the previous month. Markets were counting on a bit bigger increase of 2.1%. Month-on-month, the index was almost unchanged, rising less than 0.1%. (Event A on the chart.)
Consumer confidence declined to 125.9 in October from 126.3 in September (revised positively from 125.1). That is instead of rising to 128.2 as analysts had predicted. (Event B on the chart.) 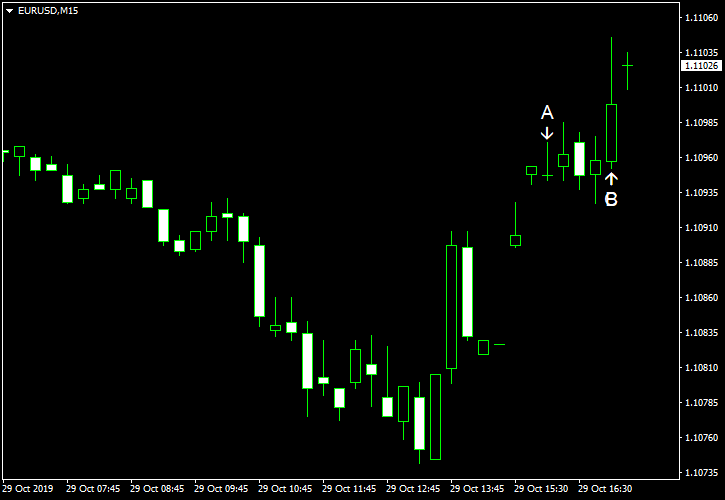 On Friday, a couple of reports were released (not shown on the chart):
Michigan Sentiment Index was up to 95.5 in October from 93.2 in September according to the final estimate. Market participants were expecting the same 96.0 reading as in the preliminary estimate.
Treasury budget demonstrated a surplus of $82.8 billion in September, which was close to the median forecast of $83.5 billion. The budget posted a deficit of $200.3 billion in August.
If you have any comments on the recent EUR/USD action, please reply using the form below.