EUR/USD fell initially today but has recovered by now. The market sentiment was beneficial to safe currencies, but the lack of progress in US-China trade talks hurt the dollar a bit. US macroeconomic data was mixed, with PPI and jobless claims rising more than was expected.
PPI rose by 0.4% in October, slightly exceeding the median forecast of a 0.3% increase. The index fell by 0.3% in September. (Event A on the chart.)
Initial jobless claims rose to 225k last week, seasonally adjusted, from the previous week’s unrevised level of 211k, exceeding the market consensus of 215k. (Event A on the chart.)
US crude oil inventories rose by 2.2 million barrels last week, more than analysts had predicted — 1.5 million barrels, and were above the five-year average for this time of year. The stockpiles climbed by 7.9 million barrels the week before. Total motor gasoline inventories increased by 1.9 million barrels and were also above the five-year average. (Event B on the chart.) 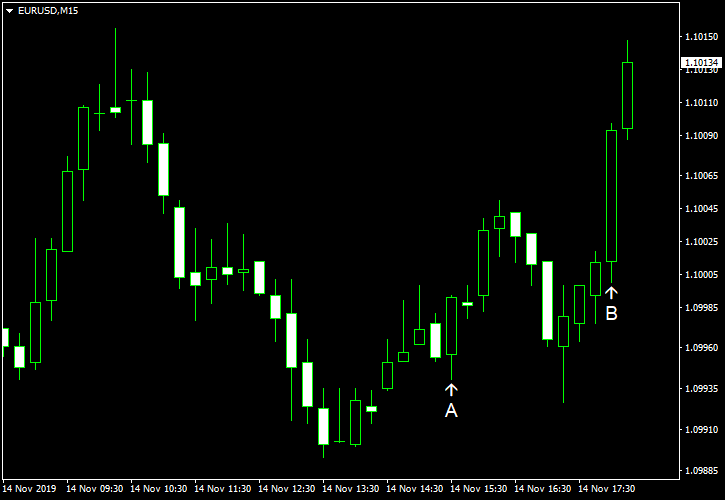