EUR/USD fell today, dropping for the ninth time in eleven session. Market analysts thought that the currency pair was driven by the same forces as previously — mainly by anticipation of higher interest rates from the Federal Reserve. While basically nobody expects the Fed to announce a hike tomorrow, traders still wait for the Fed’s statement, hoping that it may signal whether US policy makers consider four hikes it total this year. Additionally, market participants wait for Friday’s nonfarm payrolls to show that the US economy remains robust.
Markit manufacturing PMI rose to 56.5 in April from 55.6 in March according to the final estimate. It was exactly the same as the preliminary estimate and market expectations. (Event A on the chart.)
ISM manufacturing PMI, on the other hand, dropped to 57.3% in April from 59.3% in March, below the 58.4% level predicted by analysts. (Event B on the chart.)
Construction spending dropped 1.7% in March from February instead of rising 0.5% as analysts had predicted. On a positive note, the February increase got a significant revision from 0.1% to 1.0%. (Event B on the chart.) 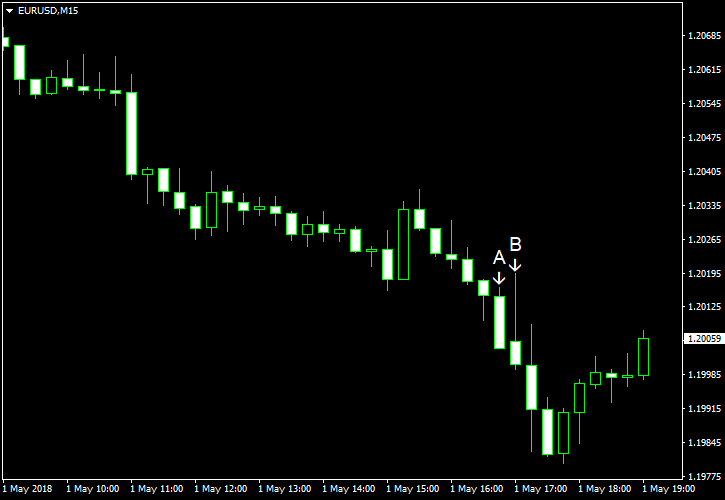