EUR/USD was rising on Wednesday, largely ignoring positive employment data, after manufacturing indices missed expectations. The currency pair attempted to extend rally after the Federal Open Market Committee left interest rates unchanged, but plunged after Jerome Powell, Chairman of the Federal Reserve, stated in the press conference that he sees no case to change rates in either direction in the foreseeable future. (Event F on the chart.)
ADP employment rose by 275k jobs in April from March, far more than market has expected — 181k. Furthermore, the March increase got a positive revision from 129k to 151k. (Event A on the chart.)
Markit manufacturing PMI edged up slightly to 52.6 in April from 52.4 in May according to the final estimate. That is in contrast to market expectations and the preliminary reading, which showed the index to be unchanged. (Event B on the chart.)
ISM manufacturing PMI dropped to 52.8% in April from 55.3% in March compared to the forecast small fall to 53.0%. (Event C on the chart.)
Construction spending fell 0.9% in March from February instead of rising by 0.3% as analysts had predicted. The February increase got a negative revision from 1.0% to 0.7%. (Event C on the chart.)
US crude oil inventories swelled by 9.9 million barrels last week, far exceeding the forecast increase by 1.3 million barrels, and were at the five-year average for this time of year. The week before, the stockpiles climbed by 5.5 million barrels. Total motor gasoline inventories increased by 0.9 million barrels but were below the five-year average. (Event D on the chart.)
As was expected, FOMC left interest rates unchanged in the 2.25%-2.5% range. (Event E on the chart.) The Committee reiterated that it will be taking a patient approach:

In light of global economic and financial developments and muted inflation pressures, the Committee will be patient as it determines what future adjustments to the target range for the federal funds rate may be appropriate to support these outcomes. 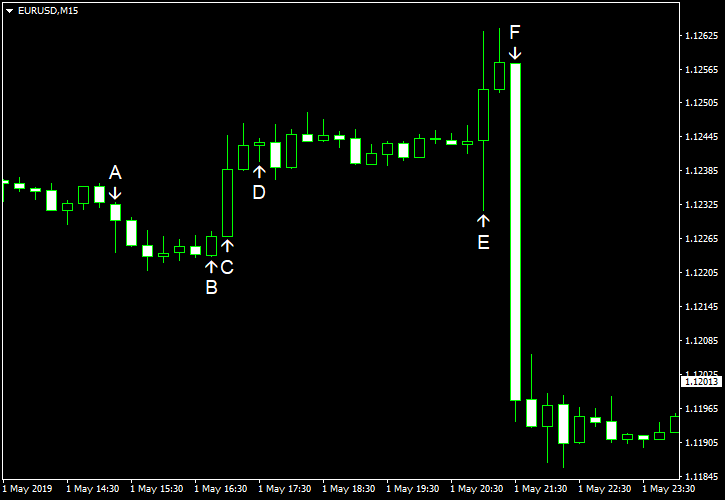